Catherine Fortunata Fiore was born and raised in Niagara Falls, Ontario to Italian immigrants. She is the oldest child with two younger brothers. 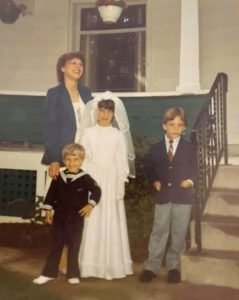 Coming from an Italian background, one of Cathy’s favourite memories in Niagara Falls was the large family picnics that would occur every year in August.  About 80 family members attended and they came from Hamilton, Brantford and even from the United States to a large park in Niagara called Queenston Heights Park.  The children would be playing soccer, feasting on barbeque and traditional Italian foods. Every year the uncles would compete on who grew the largest tomato.

“My aunts, uncles and Nona would bring the traditional foods and show off their prized tomatoes.  There was a contest for who grew the largest tomato and one lucky uncle would win.”

When Cathy reflects on these annual family picnics, she shares the memory of being carefree with cousins you don’t often see and interact with the different generations. This tradition continued with much love and fun until Cathy was about sixteen.

Unfortunately, when Cathy was 18 years old, her mother was diagnosed with Schizophrenia.  “I remember it like it was yesterday… it was August of that year. I was getting ready to go to McMaster University in September and I think she was really struggling with the fact that I was leaving home because I was going to stay in Hamilton… You don’t know what’s wrong. You just know something is wrong and you’re trying to make sense of it all.  It was a difficult time.”

Coping with the events of her mother’s mental health was tough but enduring this personal experience has expanded Cathy’s knowledge and understanding of the importance of good mental health.  The traditional Italian values of having a solid work ethic overruled the idea of mental health struggles at that time.  Now Cathy sees the other side of mental health challenges that people deal with that can disable them.  She feels this made her more sensitive, which is a beneficial attribute to have while working with the elderly in Long Term Care (LTC). On the brighter side, today, Cathy’s mom is doing well.  She explains that although there have been some difficult days, there have been many great ones.  Cathy’s perspective on life changed as she realized she wanted to do as much as possible to enjoy time with her friends and family, “…as you never know what curve ball life can bring.” 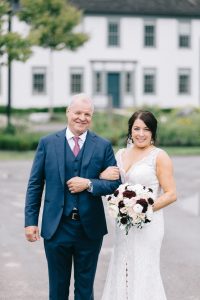 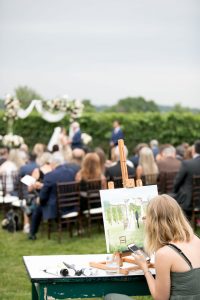 If Cathy could relive a moment, she’d love to experience her wedding day again with her wonderful husband Tom, as it is a memory she will cherish forever. Cathy and Tom were married at Ravine Vineyard in Niagara on the Lake; the ceremony was at 4 o’clock and it had just finished raining moments before.

The dew drops of rain that sat on the grapevine leaves glistened in the sun as they set the scene for this unforgettable day. As a surprise to her new husband, Cathy commissioned a live painter to capture the beauty of their marriage on canvas, except she forgot to tell him about her gift to him.  Tom was pleasantly surprised as he had no idea that Cathy had done this. Cathy happily added,

“It was the best day of my life, marrying Tom.” 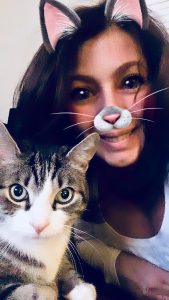 If there’s one thing that Cathy loves doing, it is travelling to tropical islands with her husband and spending time on the beach. Cathy has been to the Bahamas, Cuba, Mexico, Dominican Republic, Hawaii and even Bermuda! Currently, the couple’s favourite island to travel to is the Dominican. Some of the places Cathy hopes to visit are Jamaica, Aruba and hopefully Greece.

Now when travelling, she has someone to consider.  “I don’t have any children, but I have a fur baby named Nitro. He’s been by my side for the last 15 years and I had him since he was five weeks old.”  She explains that it’s “challenging to go on our vacations. As cats get older, they become more attached.  Luckily, I have great friends and family who help look after Nitro in our absence”. 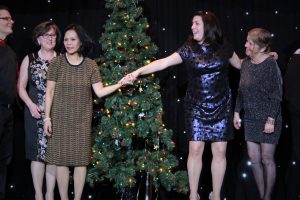 Cathy’s role as Director of Client Care at Shepherd Village includes guiding the management team of Shepherd Lodge. Cathy has worked in LTC for twenty-five years and welcomed the opportunity Shepherd Village offered, using her experience in other areas of senior care.  She is looking forward to a possible future partnership with the Scarborough Health Network team to provide services for all the seniors in the Village.  Cathy would like to be remembered for helping rebuild a management team in the Lodge focused on delivering excellent resident care.  Cathy continues to accept LTC’s daily challenges, helping Shepherd Lodge achieve its goals one day at a time.

Cathy thank you for your leadership!