Nicole McGale – Story In A Nutshell 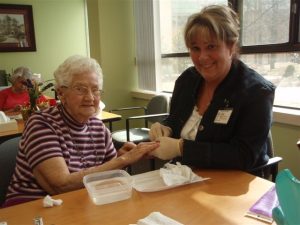 Nicole McGale is the Supervisor of the Village Club Adult Day Program for the past 10 years. Prior to this she was the full time Recreation Assistant at the Village Club since its opening in 2008. Her hopes have always been to lead a program that would utilize her strengths and feed her passions, so it was fitting that during her employment at Shepherd village Nicole furthered her education and receiving her diploma in Gerontology just before the launch of the Village Club. Presently, Nicole’s managerial position requires her to be the heart of the operation, she is in charge of organizing, planning and developing new programs, recruiting and assessing new clients, facilitating, administrating, and is in charge of the day to day budget needs of the entire program. Her main task at the Village club is to lead different programs for different needs.

During the outbreak of Covid-19, activity at the Village club had to be put on hold due to the restrictions prohibiting too many people to be gathered in the same space at a time. This caused the staff of the recreation department to be redeployed not excluding Nicole. During the pandemic Nicole filled various roles familiar and unfamiliar to her. It has been a very good learning experience. Nicole says her redeployment has allowed her to meet new people and learn new skills. She is grateful that Shepherd Village was able to keep her employed. Her greatest concern was the clients of the program and their families as well as the well-being of her own staff. Nicole spent days making calls to the families of the residents and keeping everyone informed, as well as helping in many department. She says she looks forward to the reopening of the program and seeing it at full capacity. Nicole states, little will change except for the remaining precautions such as masks and social distancing.

Nicole is one of the longest working staff members at Shepherd Village. Starting at 19 years old after graduating from Career Canada College over 30 years ago, her career began at Craig Lee Nursing home before coming to Shepherd Village a few years later. At Shepherd Village Nicole started out as a healthcare aide/ PSW in the Lodge working the evening shift. Later, she moved into a full-time position in Restorative Care at the Lodge, filling the needs of the day shift. There she worked as a Restorative Assistant helping with ambulation and exercise. When I started here I just knew that I was going to stay. Nicole reminds us of what Shepherd Village was like when she first began her position back in 91. She says the Village was a much smaller place, the Terrace had just been completed when I started. The Lodge was far less of a building compared to what you see today. She tells about the demolition of the late Lodge and having to move locations during construction. Her transition through it all has give 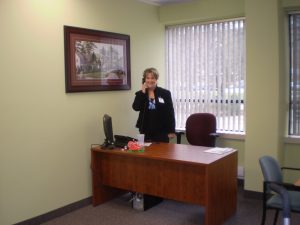 n her a tremendous feeling of gratitude just to be there, to be part of such a wonderful, expanding team, and to have the ability to positively grow and change along with the people and the building itself.

Growing up, Nicole spent her summer months volunteering at Sunnybrook hospital as a Candy Stripe nurse in the stroke unit. Her mom, who also worked at the same facility, encouraged her to persist in the position each year. There she gained the experience and a liking for the profession. As a reward and a token of appreciation from her mom, Nicole says she would receive $50 at the end of the summer to go back-to-school shopping. It wasn’t always enough, but it allowed her to get the things that she needed and motivated her to revisit the following year. The summers spent at Sunnybrook prepared her with the knowledge and skills that she puts to great use today and was only the beginning of her journey in the field of health care. 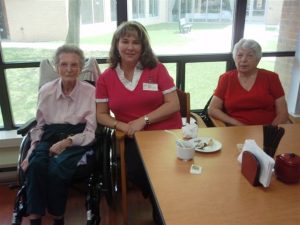 Shepherd Village has become like another home to me, while working here she bought her first home, got married, and has worked with many amazing people over the years who have taught her so much, and have influenced her life in so many ways. Nicole tells us that she is tremendously happy and satisfied with the field that she’s in, as well as her position at Shepherd Village. I absolutely couldn’t have asked for a better job. She feels Shepherd Village has affectively made use of her strengths, personal skills and her personality by not only giving her the position as Supervisor of the Village Club, but by also involving her in special projects and including her in other decisions that are made. Nicole spends her time away from work doing things that she loves such as traveling, gardening, and bonding with her granddaughter who is the newest addition to her family. We thank and acknowledge Nicole’s outstanding work and dedication to the success of the team.